I also paint kurbits, also known as dalmålnings.  Kurbits paintings are like an old folk tune. They tell a good story, and the rhythms and colors are uncomplicated and familiar.  All are casein and acrylic on canvas board.

​Here are a few examples of my work.


Her Blacks Crackle and Drag
"The moon has nothing to be sad about, Staring from her hood of bone. She is used to this sort of thing. Her blacks crackle and drag." --- Sylvia Plath, "Edge"

ARTIST NOTES:
Sylvia's hand rests on the curtain cord as she readies to pull it closed. Her back is turned from the kurbits, which represents God's loving protection. On the table she has laid out bread and milk for her children as they sleep peacefully in the next room.

The last poem Sylvia Plath wrote, (or at least the last one found on her desk,) before she took her life, was “Edge.” I first read it in 1998 when I was muddling my way through postpartum depression. I understood the imagery as big black velvet curtains slowing drawing to a close, show over, end of story. This painting hangs above my fireplace to remind me that things can always be worse. 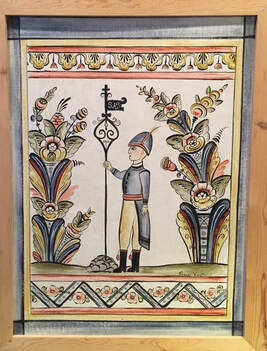 ​Ted Gathers No Moss
ARTIST NOTES:
Sylvia's husband, poet Ted Hughes was a "rolling stone," a notorious philanderer. His wife Sylvia Plath, (represented by the kurbits on the right,) killed herself in 1963. His mistress Assia, (the kurbits on the left,) killed herself, (also via gas oven,) along with their young daughter, Shura, (small sprout on left,) in 1969. The traditional Swedish grave maker flag reads SAS for, Sylva, Assia,and Shura. 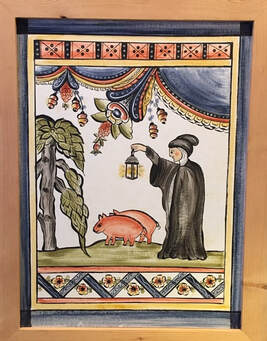 I Am a Wormy Hermit
"I am a Wormy Hermit in a country of prize pigs so corn-happy they can't see the slaughterhouse at the end of the track." Sylvia Plath, "Johnny Panic and the Bible of Dreams."


​Min
ARTIST NOTES:
A copy of the first original canvas painting I ever sold. No story behind this one really, I just made it for pretty.